Modern heathenry has to work in this world. I'm not much into reconstructionist religion. I respect those trying to reconstruct from the lore, from archeology. But the world is different, the surrounding cultures are different. Tradition is important but it must work today, in my world, in my house.

It can be hard. Let's just admit that right off the bat. You may have housemates that are uncomfortable with Heathenism. You may live in small town America with more churches than homes. You may worry about losing your career. You don't have to put off worship until you feel as though you are in a safe place. You don't have to be 'out' to show the Gods and Goddesses your devotion.

K.H. Gundarrson writes, in Teutonic Magic, that the best magical implements are those that look like everyday devices. This is a bit more difficult with altars but it can be done. Devotions can be done as often as you feel the need to maintain your spirituality, your connection. If this is once a month- that's fine! Don't ever feel you aren't doing enough. Personally, I like a daily routine. Even just a moment or so a day makes a difference. I believe the God/esses appreciate this also. They come to enjoy this from you. I highly recommend even a few seconds of devotion on a daily basis.

Daily though? Yup- I know you are busy. So am I. Work, kids, ugh. Where do I fit it in? I have had mornings I just lit a match, said a few lines and ran out the door late to work. But if I am really in a hurry I just worship at work. Yes, this can be done. Other mornings I'm up early enough that several of my altars are going by the time I've had my first cup of coffee (and I'm not super fond of group rituals- I feel each God deserves their own 'moment'- again this is personal).

Odin and Hela at Work 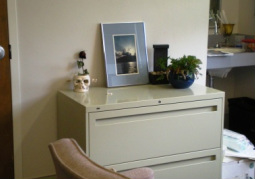 The skull- you guessed it. My Hela altar at work. Leftover from Halloween and no one messes with it. Even the flowers left to dessicate in the skull get left alone.

Odin? The blue picture is my backdrop for his offerings. If I've been in a terrible hurry I just run to the cafeteria, grab a sweet bun, pour some honey on it and give it to him. I'll leave it in front of the picture, say a few soft words and let it be. Nothing I've left has ever been bothered.
Nerthus? Hidden within the blue plant pot. 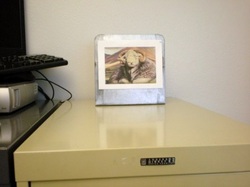 I took an old bookstand and put it on the file cabinet. Printed out a picture of a ram and taped it on. Again, anything I leave there gets left absolutely alone.

Ha! I would guess there are several other co-workers who think I am a bit forgetful with my sausages, sweet buns, or envelopes. So be it. I'd rather give my God devotion and be faulted for 'forgetfullness' than ignore my God.

In a cubicle, only have a locker, a driver? Post or tape up a picture that means something to you about the God, Goddess, or your Disir. Leave a sticky note with a message for the Them. Now, just my experience, but it seems there is a definite magic at play. If you keep your work devotionals discreet they do just fine. Or just take a moment, close your eyes and say a prayer. Nothing else needed. I guarantee this done religiously on a daily basis, in private, means more to the Gods than the finest, biggest, altar if devotions are only done there on a sporadic basis.

This concept can work in a household with housemates, spouses, friends who aren't as comfortable. It will do no good to shove Heathenry in their face.

And what about Loki you may ask. Well, look again at the Hela and Odin Altar pic. When I honor Loki at work He is invited to sit in the chair you see in the foreground, it is next to my desk. He doesn't stand much on ritual- Loki likes to be involved in your life.

There are other options. Spend some volunteer time with a charity you feel is appropriate for the God/ess in question. No time? Donate some money in the name of the God- no charity will turn down a check just because you wrote, 'For Eir' in the memo spot. Do something for the environment. Make a token that means something personal to you about the God. Have it on you 24/7 for a week to the point of slipping it in your pillow case at night. This is surprisingly hard to do, this requires devotion. The token doesn't have to be ornate; I've even made small ones with paper that I applied tape to so it would last the week.

Now of course if you make a habit of minimal worship (meaning you know you are chintzing 'their time') the Gods may not be appreciative. But if mundane life has caught up to you, then make do.

Earth Sanctuary- the top picture. Nice place- Heathens, pagans, all types invited to perform rituals on the property. Check out their site! For perspective, the smaller poles in the picture are probably about ten feet high.