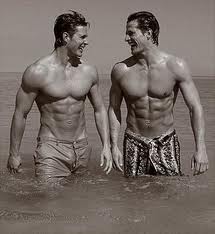 When I first met the Gods there were quite a few for me to keep track of. It was confusing.

There were two Twins that I met though, quite playful and joyous. They never particularly seemed serious about anything; They were more interested in having fun, enjoying life. In many ways I am quite young and when I first met Them it was hard for me to do anything but play. Truly I believe I was essentially baby sat but that is more a story of my birth into Their realm.

To get back to the Twins though, playfulness was right up their alley. Loki had provided me a safe place, a home base- one of His many places- for me to start out from. The Twins never came to the house, but in the surrounding woodlands and near the lake I often went to I would find them. I realize now as I write this that the Twins were some of the few Loki never felt the need to oversee (He can be quite protective).

They made an impression on me. Their sheer joy, the love that emanated from them reverberated through my soul. I would run and play, swim and dance with them seemingly for hours. To this day I don't actually remember what if anything was ever said, such was my hearing and ability to focus at the time.

I adored the Twins. As time went on and I grew there were things I had to do, things to learn, Divinities to meet. The Twins would sometimes approach but one time time Loki nodded no, 'she needs to do this (something else)'. They only had a twinge of sadness, They are optimists, then They shrugged and moved on. No more, 'Can she come out to play' type entreaties. I think I was sadder than They.

Months went on and They slipped from my field of view. I never forgot them, just hadn't seen Them again. I hadn't even known They were Gods. I read back in my journal and about five months ago had written about Them wondering where They were and who They were, surmising maybe They were a set of etin twins. Little did I know.

A few weeks ago They came to me again, a lovely surprise. I was quite sad and perplexed over an issue. They made me feel better, helped me see things in a new light. It is explained briefly in the essay on Their other page, you can read it if you wish.

What was such a joy to an aching heart That day was that as I was preparing to leave Them- I often get a sense my 'time is up'- one called me Granddaughter. I looked at him quizzically, the other told me that my Grandmother had worshipped them. Somehow this brought an enormous sense of peace to me- I still haven't quite worked out why. But the why doesn't really matter, does it? The joy and peace They bring, the fact that the Alcis Twins are still there for us, that is what matters.

As a side note, I did ask Their individual names. They laughed gently at me, 'It doesn't matter. And it isn't something for you to focus on'. They are right - even Wodan has commented I focus on 'the oddest things'. I have been known to miss the forest for the trees. Their individual names aren't important-They are never apart and how would you tell the difference anyway? So be it. Maybe another day.

And the picture? Those are the Carlson twins. What I will say is that the Alcis Twins, at least in how they have appeared to me, are quite handsome. And if you choose to believe Loki may be their sire, well- no wonder (see the essay). Even Snorri says Loki is 'fair' in appearance. Loki has appeared to me in a couple male forms but his predominant one- well when I first saw the Twins I had to do a double take. There is a striking resemblance. Though I think the Alcis Twins are far better looking than the Carlson twins. I just couldn't find a picture of mere mortals that sufficed- sigh, so be it :)

Want more on Divine Twins in general?
The Dioskouroi- an article by John Drury. A quite devoted, kind gentleman.
Proto-Indo-European Religion- Read on the Diwos Suno. Interesting page by a PIE religious reconstructionist.

I have a couple of small pear trees outside making a small, 'mini-grove' of their own. Fruit trees, I love fruit trees with their embodiment of the cycles of life for the Gods- the winter rest, blooming, fruiting, fruit decaying under the tree with seeds within.

I've placed offerings of meat and apples in the center. Ribbons are slowly being added to the trees. The Alcis never had effigies per Tacitus but I did place the old plastic rocking horse in the center of the grove.

Thank you for your light,
Your love, your teachings
of faith, of devotion.

Watch over my homestead.
I beg of you
Grace me with your blessings.

Twins
Dancers, Horsemen
Sons of the Sky
I am honored by your Grace.