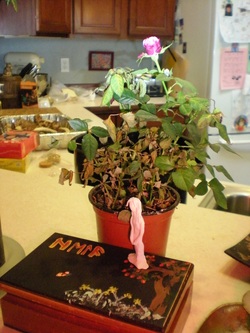 Portable Hela altar.
I rather suddenly learned Hela takes her altars quite seriously. Or at least it seems so to me. So if you do choose to make one do bear this in mind. You will be expected to care for it.

Now, small portable altars, for the most part, work best for me. I do have two altars that aren't portable in my bedroom but most of my altars must play the role of wanderer through my house.

I found a small wooden box ready to be thrown away. Repaired it and then painted over the church picture that was on the lid. I only had black spray paint, figured it would be fine. Interestingly, my 8 year old son came up, asked what I was doing. I told him, told him a bit of what I know of Hela. Now remember, this is the first he has ever heard of Her. He very seriously looked at me and said, 'But mom, Hela likes color. She wants color on that. I think you need to put apple trees, flowers and butterflys on the lid too.' Well, children often have a sense of wisdom so I did as he asked.

For some reason with Her, not with any of the others, I really felt the need for an effigy. I made one out of clay. It didn't turn out quite what I wanted- I walked away and when I came back was actually surprised at how much of Her seems to be in it. So be it.

The rose- well lesson learned. I hadn't intended to give Hela the plant but should have known better. This plant had been absolutely healthy, lush and green just six hours prior to this picture being taken. Bear this in mind with any plants next to her altar space.

And why do I say you will be expected to care for the altar? The night I made the effigy and painted the top of the box I had a dream of Hela. She sent me to go get something- i did (and did not look at it thinking it was private, Hers). When I returned to Her and handed it over it was the altar box. She took it and somehow a window opened up and she placed it with other altars. I looked at Her in surprise, 'That was my altar!' She then looked at me and clearly asked, 'Yes, and you will take care of it, correct?' but it wasn't really a question. Now this may have been subconscious bubblings, but I have never had a dream like that after any of the other altars I have made.