"There can be no keener revelation of a society's soul than the way in which it treats its children." ~ Nelson Mandela
* A few days after posting about Sigyn's children I was given the great honor of meeting Narvi and Vali briefly by Sigyn. Vali I caught the barest glimpse and He was gone. Narvi hung closer though He was somewhat shy. I gave Him a small toy- He took it and ran off a short ways. They are beautiful children. Thank you Sigyn.

The standard story of the three children Fenris, Iormungand (Jorgumand), and Hela is found in Snorri's Gylfaginning 33. When Odin learned the three children had been birthed and were being raised in Jotunheim, prophecies were traced that claim great trouble would arise from them. The Gods were afraid and sent for the children. Iomungand was cast into the ocean, Hela cast down to Helheim, and Fenris taken back with the Aesir to be raised.

The Gylfaginning here- scroll down to pg 42 to read Snorri's tale of these three children of Loki. Note- this is Snorri's interpretation of the story as handed to him. All of the eddas must be critiqued in view of the social/religious/cultural conditions of the times they were written.
Note- I am no authority. What I write is what I have learned at this point.
Angrboda has her own page here.

I put up this picture for Hela as I can't find a picture that looks anything how I see Her. I do not see Hela as strictly one half dead and one half alive, or as one half black and one half white. Another reason I haven't painted Her figure. I'm not sure I will get the coloring right. Hela is mottled- like a dead person or like a sycamore or some birch and maple varieties. As a 20 year RN who worked for almost 10 of those in ICU I saw plenty of death. That is how Hela looks, yet She also looks quite vibrant and alive.
Per Snorri, Hela was thrown into Nifleheim and 'given authority' over the nine worlds. She is to administer food and board for all sent to Her. She is to take in all who die of illness and old age. I have several pages on Her and will refer to those pages here. However, for this page, I will say I find it quite interesting the great power and authority vested in Her by Odin. This is not the power and authority one would give to a being considered so dangerous. I think there is far more to the story than written in the Lore.

This is more how Hela's skin looks to me. Not quite, but close. Traditionally She is considered ugly but I find Her quite beautiful. She is often cold in attitude, but when She does laugh the sound is somehow a mix of small bells and breaking glass. This sounds jarring, but it isn't. It is a lovely laugh quite certainly all Her own. 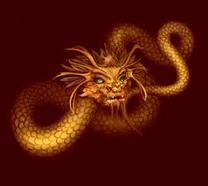 Iormungand, to me, is the Northern equivalent of the ouroboros. To a point. The ouroboros is known in many cultures- you've seen it, the snake in a circle holding it's tail. Most cultures do not see this as an evil being but as essential to the world and life itself. The ouroboros is a symbol of life and the unity of all beings. Iormungand can also be seen as an essential part of the energy that holds Midgard together. In the story of Ragnarok Iormungand is released, thereby hastening the end of the world. Thor plays his role in trying to keep Iormungand where She needs to be.

Considered by many to be an enemy to mankind; that is not the impression I get. She has a role which, in a sense, has nothing to do with us at all. And really, until the story of Ragnarok where Her power is unleashed and rages chaotically, She does nothing but keep our world together. Not sure if that is evil except in a very Christian sense. I'm not Christian so even though She may not actively be working for the good of man, I don't see Her as actively working for our destruction either. More like a dam- they aren't evil even though we know they will all break at some time.

As I mentioned, Loki showed Her to me. She isn't quite a snake, but also not quite the picture above. But that is as close as I could find. To me She was yellow and practically glowed. She speaks in pictures and symbols, I was fortunate to have Loki there to interpret for me. For some reason She did and still does represent Joy to me. Someday I may see Her again- She is ever so radiant- and I hope that by then I will be able to understand Her on my own. 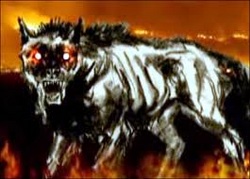 Isn't this a cool picture? But I have to admit it isn't exactly how I see Fenris. I've seen him wolfen twice and a wolf-man cross once. He was never growling and drooling. But it is a neat pic and I hope He doesn't mind.

Fenris was raised by the Aesir until He grew so large they became afraid of Him. Then, through trickery and deceit He was bound. Some feel the prophecy that stated He would become trouble was a self fulfilling prophecy. It is quite possible that His anger and role in Ragnarok is only due to the deceit handed Him by His former keepers. However, to be fair, of all the Aesir Tyr recognized and paid shyld for His part in the binding. For this Tyr certainly has respect and integrity.

Admittedly I don't quite 'get' Fenris. As said, I've met Him three times so I am sure there is a lesson for me to learn of/from Him. But I can't quite grasp it. The Gods won't help me grasp that either- both Odin and Loki will talk of Him but they will not hand me the answers on a platter. Odin says, quite plainly, 'Fenris is a tricky concept to grasp. This is why so many have hatred and fear for Him.' Ok. I get that. We are often scared of the unknown.

Of great interest is the comment by Snorri that as Fenris lies bound with His jaws propped open by a 'certain sword' howling horribly, the saliva that pours out of His mouth forms a river called Hope (the Everyman version translated by Anthony Faulkes- the link above names the river Van and I do not know the entymology of that word). Simek, though he expresses doubt in his Dictionary of Northern Mythology, also translates the word van to hope. If I follow the Hope translation there is a sense. Maybe that is part of the lesson, that only in the face of great horror and pain can the phenomenon of hope even exist. If so, this is a great gift.

Other than the above hypothesis, what have I learned? Well I'm not sure He flat out wants to destroy us. I'm not so sure He cares either way. He can eat pain. He represents a very different part of the energy cycle than most people are comfortable dealing with. I am quite positive He is essential though. If anyone out there reading this follows Fenris I would love to have your comments on Him. My Email.
More about Fenris here and here. 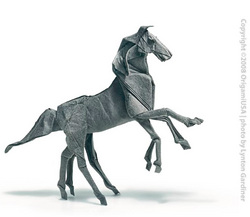 Picture from OrigamiUSA. Very cool, huh?
Sleipner is the child of Loki during His time as a mare. Sleipner's sire was a giant stallion named Svadilfari. There are several theories as to his eight legs. One being they symbolise speed. Another that they symbolism a pair of Divine Twins who in many myths and cultures are represented by a pair of horses. A third theory is of the Icelandic Horse which has an additional gait called a Tolt. This is a running type walk that, when the animal goes by at speeds of around 30 mph, can create the optical illusion of eight legs.


Sleipner is mentioned several times in the lore. It is easiest to send you to the wiki on him for sources.

Glut and the children Eisa and Einmyria 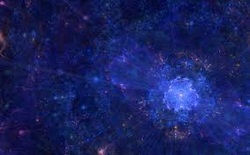 Glut, also known as Glow, is possibly the first of Loki's wives. I have not been able to find Her in the lore. I have found a few sites that talk of Her- their links are below. Now, clearly I have no problem posting UPG but I do at least like something to back it up. So, without lore why am I including Glut and Her children with Loki? Because back in Dreamland, during Inception before I had even figured out His common name of Loki, there was a very clear moment in trance.  I was downstairs in the house Loki allowed me to use when I realized something about His past. I just knew, without doubt, that He had two, maybe three, wives. I don't know why or how I knew, I just did. Why was one a maybe? I don't know. But it was strong enough that I include Her here, especially as She does exist in the gnosis of others. That reason, and because it only makes sense. He is quite ancient. Relationships are likely to come and go over eons. 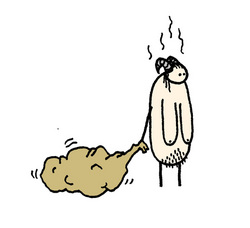 I'm not so sure Loki isn't still siring children of some kind. They may not all be Gods but lesser wights that have value and purpose.


The picture is a child's type drawing of Gryla, an Icelandic Troll woman who is mother to the 13 Jólasveinar. She is known to eat children. Her sons, also known as the 13 yule lads, come down from her mountain home around the 12th of December and stay near villages for 12 days playing tricks on people. Story and pic (Hugleikur Dagsson) from Something About Iceland.